Yesterday we mentioned Chapter 13 of the Book of Deuteronomy. This chapter is the origin of the Hebrew figure of speech ‘Mesit U-Madi’ach’ (מסית ומדיח) and its initial biblical meaning is ‘instigation to idolatry.’

However, that is not the literal translation, since the phrase is made up of TWO Hebrew words – ‘Mesit’ and ‘Madi’ach’ – which are both ACTIVE ACTIONS (Hebrew verbs) that literally mean ‘to incite’ (‘Mesit’) and ‘to become distanced from’ (‘Madi’ach’).

The Hebrew Bible uses this verb (‘Madi’ach’) in its figurative way, meaning ‘to move someone away from the right path’ as can be seen in the following verse:

“That certain worthless fellows have gone out among you and have drawn away the inhabitants of their city, saying, ‘Let us go and serve other gods…” (Deuteronomy 13:13)

‘Have drawn away’ appears in the original Hebrew as ‘Va-Yadichu’ (וידיחו) which is the plural form of ‘Madi’ach.’ Over the years, this Hebrew term ‘Mesit U-Madi’ach,’ which speaks about ‘instigation to idolatry’ became a general phrase used to describe anyone who is trying to persuade other people to do immoral things. 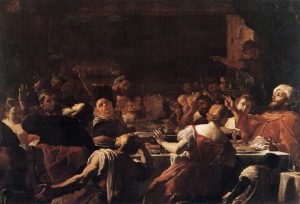 A wise old Jewish lesson teaches us that a person can be persuaded ‘to follow the wrong path’ by THREE different factors:

“If a prophet or a dreamer of dreams arises among you…” (Deuteronomy 13:1)

By his/her family (the second scenario, the ‘friends and relatives’):

“If your brother, the son of your mother, or your son or your daughter or the wife you embrace or your friend who is as your own soul entices you secretly…” (Deuteronomy 13:6)

And by public opinion/social pressure (the third scenario, the ‘city’):

“If you hear in one of your cities, which the LORD your God is giving you to dwell there, that certain worthless fellows have gone out among you and have drawn away the inhabitants of their city… (Deuteronomy 13:12-13).