Before the Torah is read at the synagogue, there is a ritual of opening the ‘Torah ark’ and leading the Torah scroll to the podium as the people are singing the following verses (in Hebrew, of course):

“And whenever the ark set out, Moses said, “Arise, O LORD, and let your enemies be scattered, and let those who hate you flee before you.” And when it rested, he said, “Return, O LORD, to the ten thousand thousands of Israel.” (Numbers 10:35-36) 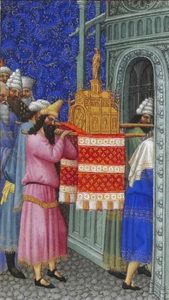 This biblical segment is well-defined and is ‘marked’ with two punctuation marks in the original Hebrew. It is an extremely rare phenomenon in the Hebrew Bible and can only be found ONCE more in Psalms 107.

The two punctuation marks are actually two reversed ‘Nun’ {נ}(one of the letters in the Hebrew alphabet) and look like a form of parentheses.

In the medieval Jewish Bible commentary world, there was a very interesting discussion about the meaning of the two punctuation marks.

Even though there is more than one opinion with regard to that, they all agreed that these two verses are a different biblical unit which is completely separated from the verses which appear before and afterwards. In other words, we are talking about unique biblical poetry that appears in the middle of the Book of Numbers. What is the meaning of this poetry?

The word ‘arise,’ which appears at the beginning of this poetry, occurs in the original Hebrew as ‘Kuma’ {קומה} and literally means ‘to stand up.’ However, the deeper layer of this Hebrew root ‘K-U-M’ {ק-ו-מ} means ‘to stand up against someone’ and from this root is derived another biblical Hebrew word for ‘enemy’ – ‘Kam.’ {קם}

The word ‘Kam’ can be found in another piece of biblical poetry: The Song of the Sea from the Book of Exodus:

“In the greatness of your majesty you overthrow your ADVERSARIES; you send out your fury; it consumes them like stubble.” (Exodus 15:7)

There in the original Hebrew the word ‘adversaries’ appears as ‘Kameicha’ {קמיך} (the plural plus suffix form of ‘Kam’).

The word ‘return’, which is mentioned at the end of this poetry, appears in the original Hebrew as ‘Shuvah’ {שובה} and bears a ‘military connotation’ as can be found in the following example:

“As they were coming home, when David RETURNED from striking down the Philistine, the women came out of all the cities of Israel, singing and dancing, to meet King Saul, with tambourines, with songs of joy, and with musical instruments.” (1 Samuel 18:6)

This means that the biblical poetry that appears in the middle of the Book of Numbers talks about the old custom the Israelites had, prior to the building of the Temple in Jerusalem, to take the Ark of the Covenant with them to the battlefield as recorded in several places in the Bible (such as the Book of Samuel).

Many years later, after biblical times and during the long Exile, this biblical poetry was sung in synagogues in order to express the deep aspirations and longings of the Jews:

“Return, O LORD, to the ten thousand thousands of Israel.”