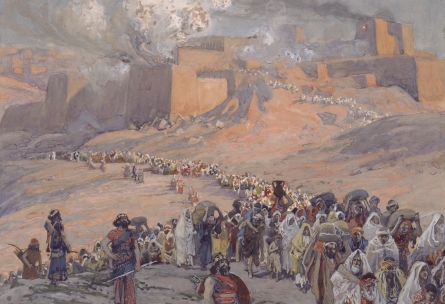 In yesterday’s post we talked about the biblical definition of ‘property’ – ‘Achuza’ {אחוזה} in the original Hebrew – and today we will see how it is related to the jubilee.

As mentioned before, the Hebrew root of the word for property (‘Achuza’) is A-CH-Z {א-ח-ז} which means ‘to hold’ or ‘holdings’ and it implies that the legal owner of the land is in a sense of ‘holding the legal rights’.

When the Bible says the following about the jubilee:

It means that once every fifty years, on the year of jubilee, ALL properties should return to their rightful owner. But what happens when someone bought his neighbor’s property, for example?

In other words, how do we KNOW who is the rightful owner?

The answer lies in the Book of Joshua, in the division of the land of Israel to the different tribes (Joshua 14-19) and in the Book of Numbers which explains how this division was determined:

According to this division, which was established on biblical principles of social justice and equal rights (‘every tribe shall be given its inheritance in proportion to its list’), we know who is the rightful owner of the land.

After this division of land, things could have changed as can manifested in a shift of an economic situation of the people either due to their own actions or as a result of something that happened which was not in their hands and that caused them to lose their property.

And right at this point, the biblical mechanism of social justice enters the picture by fixing the situation and gives them (or their children) a second chance.

The ‘Yovel’ {יובל} (‘jubilee’) is intended to reduce the gap between the rich and the poor by regaining the poor their ‘liberty’ back (‘and proclaim liberty throughout the land to all its inhabitants’).

‘Liberty’ is ‘Deror’ {דרור} in the original Hebrew and this Hebrew term is used to describe a situation in which a person regains his freedom back and that means in biblical terms that he received his property back.

The key word here is ‘back’. In fact, according to the biblical law, as we already saw, he never loses the rights to his property because it his ‘Achuzah’ – a property which belongs to its owner by law FOREVER, so the property is actually returning to its original and lawful owner.

If this is the case, where is the social justice for the person who bought the property and now it is being taken from him?

The answer is simple. In the initial division (in the book of Joshua) everyone received a piece of land which was suitable for their needs and could sustain them perfectly.

According to the biblical order, a piece of land is not a luxury but rather a basic right for everyone. The biblical law does not interfere in what a person is doing with his OWN piece of land but will interfere when the basic balance is broken.

In other words, the biblical social order cannot accept a situation when person A has absolutely NO property while Person B has more property than he actually needs.

This scenario is morally wrong, unjust and puts the entire society in danger and that is exactly what the jubilee comes to fix:

“Therefore you shall do my statutes and keep my rules and perform them, and then you will dwell in the land securely.” (Leviticus 25:18)