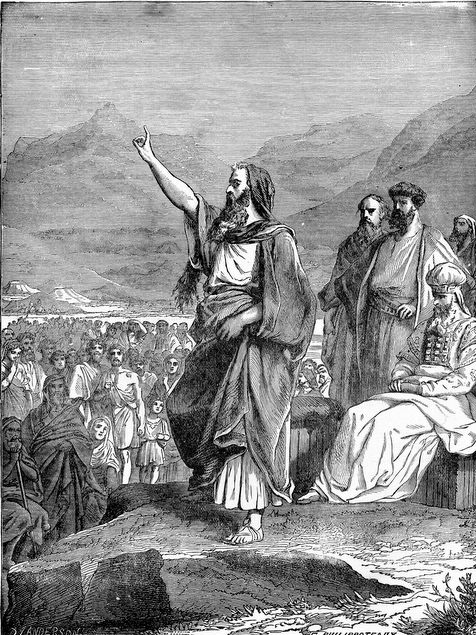 Tomorrow’s ‘Parashah’ (weekly Torah portion) is ‘Devarim’ (Hebrew for ‘words’). This is the first ‘Parashah’ in the Book of Deuteronomy and can be found in Deuteronomy 1:1–3:22.

Our weekly Torah portion is the one that opens the fifth and final book of the Torah – the Book of Deuteronomy or as it called in the original Hebrew ‘Sefer Devarim.’ {ספר דברים}

We have previously discussed the meaning of the Hebrew root D-B-R {ד-ב-ר} which is the root of the Hebrew name ‘Devarim’ {דברים} and relates to the concept of ‘speaking’ – hence its meaning in our case is ‘words.’ Let’s have a look at the first verses of the Book of Deuteronomy:

“These are the words that Moses spoke to all Israel beyond the Jordan in the wilderness, in the Arabah opposite Suph, between Paran and Tophel, Laban, Hazeroth, and Dizahab. It is eleven days’ journey from Horeb by the way of Mount Seir to Kadesh-barnea. In the fortieth year, on the first day of the eleventh month, Moses spoke to the people of Israel according to all that the LORD had given him in commandment to them, after he had defeated Sihon the king of the Amorites, who lived in Heshbon, and Og the king of Bashan, who lived in Ashtaroth and in Edrei. Beyond the Jordan, in the land of Moab, Moses undertook to explain this law, saying…” (Deuteronomy 1: 1-6)

The ‘Vilna Gaon’ – the nickname of Rabbi Elijah of Vilnius (Lithuania), who lived there during the 18th century – noticed that the element of ‘speaking’ is repeated THREE times in the verses above so he was wondering what is the reason for that and what is the lesson? The ‘Vilna Gaon’ has explained this issue in the following way:

The Book of Deuteronomy is actually a repetition of the Torah and that is the meaning of its name in Greek and all the other European languages ‘Deuteronomy’ means ‘second law.’ Now, the book itself is divided into THREE parts: from the beginning until the ‘Ten Commandments’ (chapter 5) is the first part which includes ‘words of morals.’

The second part begins with the ‘Ten Commandments’ until chapter 27 and includes ‘words of the Biblical Commandments.’

“Moses spoke to the people of Israel according to all that the LORD had given him in commandment to them” – refers to the second part of the book, the part about the ‘words of the Biblical Commandments,’ because it is written here in the original Hebrew as the word ‘Tzivah’ {ציווה} (‘commandment’) which is from the same root as the Hebrew word ‘Mitzvah’ {מצווה} (‘commandment’).