As we have mentioned here before, part of the service at the synagogue during every Shabbat and Jewish holiday is publicly reading aloud from the Torah, as well as selected chapters from the other parts of the Hebrew Bible.

The Torah – meaning the five books of Moses, are divided into small portions to be read in every Shabbat so eventually the ENTIRE Torah is read in a course of ONE year. The ending of the Torah reading cycle is in accordance with the end of the High Jewish holidays – and especially coincides with the SECOND holiday of Succoth, that is also known as ‘Simcha’t Torah’ {שמחת תורה} – Hebrew for ‘rejoicing of Torah’ (I will elaborate on this matter very soon). 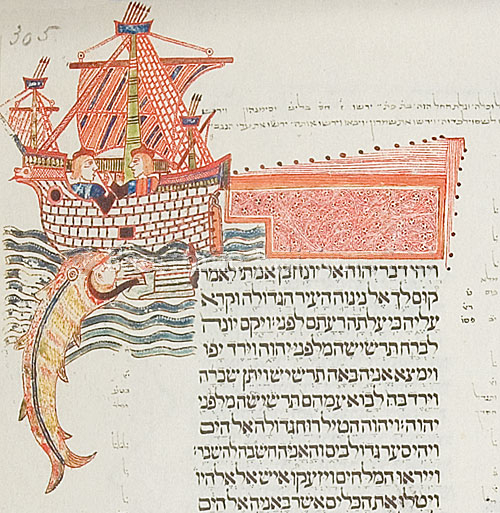 Having said that, it is important to mention that the Torah is read on Jewish holidays AS WELL. However, due to the fact that the holidays are not a part of the annual cycle of the Torah reading – it is customary to read biblical segments which are related to the spirit of the holiday and can teach us a relevant and important lesson.

This is certainly the case with the fascinating example of Yom Kippur. There, it is customary to read (besides a segment from Torah) from the Book of Jonah.

Now, what is the connection between the story of Jonah and ‘Yom Kippur?’

Well, the answer lies in the profound meaning of both ‘Yom Kippur’ and the story of Jonah. At first, Jonah was called by God to warn the people of the city of Nineveh that if they would not change their wicked ways – they would be punished.

But instead of going to Nineveh, Jonah was trying to flee the presence of the Lord and he went on a ship on its way to Tarshish {תרשיש} (which is the original Hebrew name of the city of Paul ‘Tarsus’). Eventually Jonah came to his senses and carried out the mission he had received from God and went to Nineveh. The end of this fascinating biblical story was that Jonah’s prophecy for the people of Nineveh did NOT take place BECAUSE the people of Nineveh, as well as Jonah himself, changed and turned away from their wicked ways and REPENTED for their sins.

There is no greater lesson for ‘Yom Kippur’ than the story of Jonah and the people of Nineveh – a story that teaches us that no matter what has happened in one’s life, one can always change his bad ways and be accepted by God, as recorded in the Book of Jonah:

“And let them call out mightily to God. Let everyone turn from his evil way and from the violence that is in his hands. Who knows? God may turn and relent and turn from his fierce anger, so that we may not perish.” When God saw what they did, how they turned from their evil way, God relented of the disaster that he had said he would do to them, and he did not do it.” (Jonah 3:8-10)

In the last chapter (chapter four) of the Book of Jonah it is explained that:

In the original Hebrew ‘a booth’ appears as ‘Succah'{סכה}  – yes that is right, it is same as the name of the NEXT holiday which will take place on Sunday evening (‘Succoth’).