A couple of days ago we began discussing the Hebrew meaning of the sacrifices in the Tabernacle and the Temple. We mentioned that the Hebrew word for ‘sacrifices’ is ‘Korbanot’ {קורבנות} which comes from the Hebrew root K-R-V {ק-ר-ב} that means ‘close’ – and by that it symbolizes the process of getting closer to God.Today we will discuss the other ENGLISH word that is used in the context of sacrifices and this is the word ‘offering’.

In Hebrew both ‘sacrifices’ and ‘offerings’ would be translated as ‘Korbanot’ because of the element of CLOSENESS to God, which can be found in the Hebrew root K-R-V, as mentioned above. However, there is a specific translation to the English word ‘offering’ and that is ‘Minch’ah’ {מנחה} in Hebrew (sometimes it appears as ‘Korban Minch’ah’ {קורבן מנחה}). 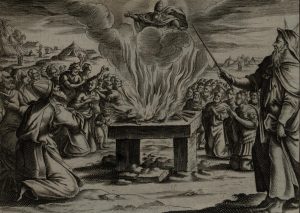 ‘Minch’ah’ is a ‘voluntary offering’ and that is why it is common to translate it to English as ‘gift offering’. This Hebrew word ‘Minch’ah’ comes from the Hebrew phrase ‘Le-hani’ach Et Ha-da’at’ {להניח את הדעת} which means ‘to satisfy or to keep happy’ and that is precisely the purpose of this offering – to show gratitude to God.

Today, it is customary in Judaism to offer three main prayers a day: in the morning, the afternoon and in the evening. The prayer in the afternoon is called in Hebrew ‘Minch’ah’ because when the Temple in Jerusalem was still standing, the afternoon was the time of day of the biblical offering called ‘Minch’ah’.

Over the years, this Hebrew word ‘Minch’ah’ became a synonym for ‘afternoon’ in Hebrew. It is still common to hear old Jewish people who grow up in Central Europe talking in the streets of Jerusalem and Tel-Aviv about their daily ‘Teh Ha-Minch’ah’ {תה המנחה} meaning ‘afternoon tea’.