In Biblical Hebrew, one can find two different words to describe the verb ‘to spy’.

One of them can be found in the opening verses of our weekly Torah portion:

“The LORD spoke to Moses, saying, “Send men to spy out the land of Canaan, which I am giving to the people of Israel. From each tribe of their fathers you shall send a man, every one a chief among them.” (Numbers 13:1-2)

In the original Hebrew the verb ‘Ve-Yaturo’ (ויתרו) appears as ‘to spy out’. The meaning of the Hebrew root T-U-R (ת-ו-ר) – which the verb ‘Yaturo’ derived from – literally means ‘to explore.’ Its Akkadian (one of the languages of the Ancient East) equivalent is ‘Taru’ which means ‘to wander around.’ This Hebrew verb can also mean ‘to seek’ or ‘to search out’ as can be found in the following example from the Book of Ezekiel:

“On that day I swore to them that I would bring them out of the land of Egypt into a land that I HAD SEARCHED OUT for them, a land flowing with milk and honey, the most glorious of all lands.” (Ezekiel 20:6) 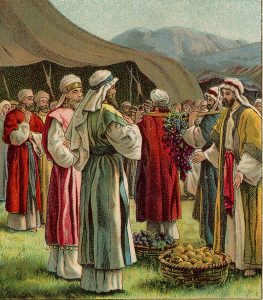 When the Hebrew Bible uses this verb to describe an act of ‘spying’ it not referring to an act of military spying but rather an act of ‘civilian spying’ – meaning to find out more details about the status of the land, mainly from economic perspective.

An excellent example of ‘spying’ the land to know more about its economic situation can be found in one of the most well-known biblical illustrations:

“And they came to the Valley of Eshcol and cut down from there a branch with a single cluster of grapes, and they carried it on a pole between two of them; they also brought some pomegranates and figs.” (Numbers 13:23)

This biblical illustration of the spies carrying a single cluster of grapes on a pole between two of them appears on the logo of the Israeli Tourism Ministry.