During the last couple of days we discussed the deeper meaning of the original Hebrew regarding the beginning of Creation. Before we continue to discuss the Hebrew meaning of the next days of Creation, it is a good idea to talk a bit about the ancient Jewish perception and interpretation of the events encompassing Creation – or in other words, HOW did God create the world?

And the answer for this question is by the power of SPEAKING. According to the Jewish tradition, the world was created as God spoke, along with every single other created thing composing His Creation.

The origins of this tradition are found in the biblical verses themselves, which mention specifically that ‘God said’, as can be seen in the following examples:

“And God SAID, “Let there be an expanse in the midst of the waters, and let it separate the waters from the waters.” (Genesis 1:6)

“And God SAID, “Let the waters under the heavens be gathered together into one place, and let the dry land appear.” And it was so.”(Genesis 1:9)

It is interesting to discover in the case of the light, heaven and earth ANOTHER important part of God’s power of speaking is revealed as can be seen in the following examples:

“God called the light Day, and the darkness he called Night.”

“And God called the expanse Heaven”

“God called the dry land Earth, and the waters that were gathered together he called seas.”

The usage of verbs that are related to speaking such as ‘said’ and ‘called’ led to the perception that the LANGUAGE played a significant role in the process of the Creation. In fact, there is an entire division of studies in the ‘Kabbalah’ that deals with this subject and is called in Hebrew ‘Ma’ase Bereshit’ {מעשה בראשית} – ‘the act of the Creation of the world.’ 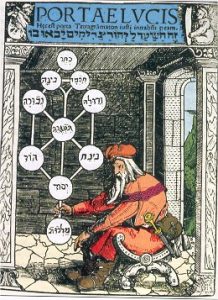 ‘Ma’ase Bereshit’ is a part of ancient Jewish literature, which interpreted the Torah (and some other parts of the Hebrew Bible as well) according to the ‘fourth pillar of Jewish Bible interpretation’ (we will talk more about it in the future), which is called ‘Sod’ {סוד} – Hebrew for ‘secret’ and refers to the deeper layers of God’s words that are ‘hidden’ in the Bible and therefore requires a certain way of studying the Bible.

According to this ancient Jewish literature, in order to create the world by the power of speaking – a certain language or alphabet would have been created first and this language/alphabet is the original language of the Bible, Hebrew.

This philosophical approach is pointed out in the FIRST verse of the Bible ‘In the beginning, God created the heavens and the earth’ as a proof for this idea because if we look at the original Hebrew ‘Bereshit Bara Eloeim Et Ha-Shamaim Ve-Et Ha-Aretz’ {בראשית ברא אלוהים את השמים ואת הארץ}– we will notice that the FIRST Hebrew word which appears immediately after ‘Bereshit Bara Eloeim’ (‘in the beginning God created’) is ‘Et.’ {את}

Now, the word ‘Et’ is in fact a Hebrew preposition that is used to indicate a direct object and was ‘swallowed’ in the English translation inside the word ‘the’ as can be seen here in bold ‘in the beginning, God created THE heavens and the earth.’

If we examine closely the TWO Hebrew letters the word ‘Et’ is composed of, we will find out that those letters are ‘Alef’ {א} and ‘Tav’ {ת} which are the FIRST and the LAST letters of the Hebrew alphabet. Therefore, the creation of the Hebrew language as well as (according to the same ancient Jewish literature) the beginning and the END of the world.