The first day of the Creation ends with the following words:

“God called the light Day, and the darkness he called Night. And there was evening and there was morning, the first day.” (Genesis 1:5)

This biblical verse is the source for the Jewish custom of starting the day from the evening before, as we know from Shabbat, for example. It means that FRIDAY evening is the beginning of the Jewish Sabbat and it lasts through to the next day, which is Saturday, up until the next evening so what is known in English as ‘Saturday night’ is in fact already SUNDAY according to the Jewish calendar. 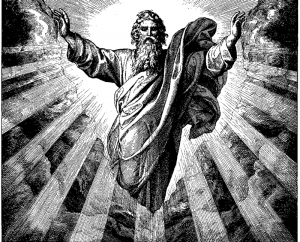 According to one tradition, the origins of the Hebrew word for ‘evening’ – ‘Erev’ {ערב} – come from the old Hebrew verb ‘Le-Arev’ {לערב} which means ‘to mix’ or ‘to intermingle’ and refers to the special time of the day in which the sunset and light and darkness are ALL present and appear as a ‘mix.’

The Hebrew word for ‘morning’ is ‘Boker’ {בוקר} and it derives from the old Hebrew root B-K-R {ב-ק-ר} which means ‘to break through’, ‘ to penetrate’, ‘to crack’ and refers to the  special time of the day in which the light is ‘breaking through’ the darkness of the night.

The Hebrew learners among you are probably looking at the English translation and comparing it with the original Hebrew only to find out that the proper Hebrew phrase for ‘the first day’ should be ‘Yom Rishon’ {יום ראשון} (which is also Hebrew for ‘Sunday’) and ‘Yom Echad’ actually means in English ‘ONE day.’

Now, the Bible uses the Hebrew phrase ‘Yom Echad’ or ‘one day’ in English – for a reason, and that reason is with the intent of marking the first period of time which was called ‘a day.’

In other words, now when ‘God called the light Day, and the darkness He called Night’ appeared in the ‘first day of Creation’ it is in fact the invention of the CONCEPT of a DAY. This is why the original Hebrew does not talk about ‘the first day’ but rather the period of time from one evening to the next evening and that is called ONE DAY (‘Yom Echad’).