Following Adam and Eve’s sin, God punished them. In this post, I would like to focus on Adam and Eve’s punishment – from the Hebrew perspective – as described in the Bible:

“To the woman he said, “I will greatly increase your pains in childbearing; with pain you will give birth to children…” (Genesis 3:16)

The original words for ‘pains in childbearing’ are ‘Itzvonech Ve- Heronech’ {עצבונך והרונך} and both Hebrew words are actually one term. The Hebrew noun ‘Iztavon’ {עצבון}  derives from the root ‘A-TZ-V’ {ע-צ-ב} which means ‘sorrow’, ‘grief’ and also simply ‘sadness.’ 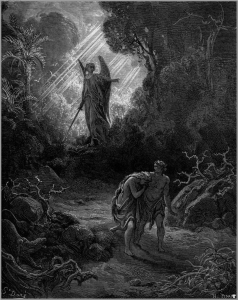 This is a unique case in which there is a clear difference between the use of this Hebrew root (‘A-TZ-V’) in the pattern of a verb or in the pattern of a noun. When the Hebrew Bible uses this root in a VERB pattern it usually means ‘sorrow’ or ‘grief’, as can be found in the following example:

“Now Jacob’s sons had come in from the fields as soon as they heard what had happened. They were filled with grief…” (Genesis 34:7)

There, the phrase ‘they were filled with grief’ appears as ONE Hebrew verb  ‘Va-Yit’atzvu’ {ויתעצבו}– which means they were sorry to hear what happened.

However, when this Hebrew root (‘A-TZ-V’) is found in Biblical Hebrew in the NOUN pattern, it actually means ‘pain’ as can be found in the following example, which is taken from Adam’s punishment:

“To Adam he said, “Because you listened to your wife and ate from the tree about which I commanded you, ‘You must not eat of it,’ “Cursed is the ground because of you; through PAINFUL TOIL you will eat of it all the days of your life.”(Genesis 3:17)

There, the original Hebrew word for ‘painful toil’ is ‘Itzavon’ (the same word was used to describe Eve’s punishment).

But what is truly fascinating here, is that Hebrew has yet another word to describe ‘pain’ – a word that is used more frequently and this word is ‘Ke’ev.'{כאב}  In fact, the Hebrew noun ‘Itzavon’ can be found ONLY three times in the ENTIRE Hebrew Bible –and ALL three instances are found in the opening chapters of the Book of Genesis: the first TWO times are found in the third chapter, in the descriptions of the punishments of Adam (once) and Eve (twice).

This fact teaches us that the ‘pain’ in Adam and Eve’s punishment is not simply a typical and usual type of pain (because there is another and more frequently used Hebrew word for that) but rather some kind of a physical pain which is strongly connected to the concept of ‘sorrow’ or ‘grief.’

In other words, the center of this pain has at its core ‘sorrow’ or ‘grief’ – in a spiritual and mental state of mind which manifests itself in an actual physical pain, and that means the CURE for this pain is spiritual as well.

The THIRD time this rare Hebrew noun (‘Itzavon’) can be found is in the fifth chapter of Genesis:

“He named him Noah and said, “He will comfort us in the labor and PAINFUL TOIL of our hands caused by the ground the LORD has cursed.”  (Genesis 5:29)

From this biblical reference we can learn that the cure for this kind of ‘pain’ is indeed spiritual and not physical, because it says specifically ‘He will COMFORT us…’