The famous biblical story of Cain and Abel is found in the fourth chapter of the Book of Genesis. Today I would like to start a short series of posts which will discuss and explain the deeper Hebrew meaning of their names and their special features – according to the original Hebrew of the Bible.

“And Adam knew Eve his wife; and she conceived, and bare Cain, and said, I have gotten a man from the LORD. And she again bare his brother Abel. And Abel was a keeper of sheep, but Cain was a tiller of the ground.” (Genesis 4:1-2 KJV)

The original meaning of the Hebrew name ‘Cain’ {קין} is very unique. In the original Hebrew Eve used the verb ‘Kaniti’ {קניתי} which was translated to English as ‘I have gotten’ and in Hebrew sounds similar to the name ‘Cain.’

Most of the Hebrew learners – as well as Modern Hebrew native speakers – will identify the Hebrew verb ‘Kaniti’ as ‘I have bought’ and the infinitive form of this verb which is ‘Li-Kenot’ {לקנות} meaning ‘to buy.’ Yes, this is the SAME Hebrew verb one uses today when one is going shopping in Israel… 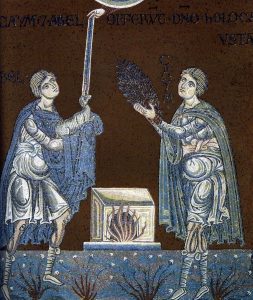 However, the initial meaning of this ancient Hebrew verb is ‘to create’ as can be found in the following biblical reference:

“…Blessed be Abram by God Most High, Creator of heaven and earth.”(Genesis 14:19)

There, the original Hebrew word for ‘Creator’ is ‘Kone’ {קונה} which derives from the same root as ‘Kaniti’ and also sounds like the name ‘Cain’.

This connection between ‘creating’ and ‘buying’ can also be seen in the old Latin translation of the Bible (the ‘Vulgate’) which translated the Hebrew verb ‘Kaniti’ into the Latin verb ‘possedi’ – that means ‘to own’ or to ‘have’ something or simply ‘to possess.’ And now we can also better understand the usage of the original Hebrew in the word ‘Kone’ for ‘Creator’ when speaking about God (‘Creator of heaven and earth’) because God not only created the heaven and earth but He also OWNS them.

To be in possession of something means to have a responsibility and to take care of it. And that is the reason Eve used the Hebrew verb ‘Kaniti’ after the birth of Cain – who was the FIRST child – which means she was not just ‘creating’ him but also receiving the responsibility to take
care of him.

So what went wrong? How and why did Cain end up killing his own brother? The
answer in the upcoming posts… stay tuned…