When looking closely at the biblical passages speaking about the holy days, it appears there is one phrase that keeps repeating:

“The LORD spoke to Moses, saying, “Speak to the people of Israel and say to them, these are the appointed feasts of the LORD that you shall proclaim as holy convocations; they are my appointed feasts.” (Leviticus 23: 1-2)

‘Holy convocations’ appears in the original Hebrew as ‘Mikra’ei Kodesh’ {מקראי קודש} (or ‘Mikra Kodesh’ {מקרא קודש} in the singular form) and can be found in the biblical description of almost every holy day.

The English translation of this Hebrew term is based on the appearance of this phrase once more in the Book of Isaiah:

“New moon and Sabbath and the calling of convocations– I cannot endure iniquity and solemn assembly.” (Isaiah 1:13).

The Hebrew root of the word ‘Mikra’ {מקרא} is K-R-A {ק-ר-א} and the Hebrew learners will probably recognize this root by its other meanings: ‘reading’ and especially ‘calling’ as in the basic Hebrew question ‘E’ch Koreim Lech’? {איך קוראים לך} (‘what is your name?’ but literally means ‘how do they CALL you?’)

This is why it is no surprise to discover the word ‘proclaim’ in the English translation appears as ‘Tikre’u’ {תקראו} in the original Hebrew – derived from the same root as ‘mikra’ (K-R-A) and means ‘call’ .

Having said all of that, what is the REAL meaning of the Hebrew word ‘Mikra’ei’? Is it ‘convocations’ (like the English translation) or calling or reading? Or perhaps it is ‘proclaiming’?

The answer is ALL of the above! 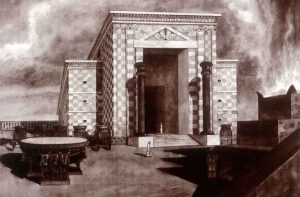 The tradition of reading the Torah publicly began over two thousand years ago. In the ancient world. Important announcements, news and new laws were ‘read’ in front of everyone in public places, so reading was actually ‘calling out loud.’

In fact, in Hebrew, ‘announce’ and ‘proclaim’ are the SAME word. One of the different kinds of announcements was to assemble people or in other words ‘to invite’ them for an assembly or convocation, as can be found in the following verse from the Book of Samuel:

“…afterward those who are INVITED will eat. Now go up, for you will meet him immediately.” (1 Samuel 9:13)

In the original Hebrew ‘invited’ appears as ‘Kerueim’ {קרואים}  – yes, that is right, another word from the same Hebrew root K-R-A, hence should be understood in Hebrew as ‘those who are called’ (‘convened’).

The biblical festivals were different than the regular days because it was not permissible to work like one would on any other day and because the festivals were ‘proclaimed’ or ‘called’ HOLY. During these biblical holy days people were ‘invited’ to take part in large ‘convocations’ that were held at the Temple in Jerusalem and as a part of the festival events the Torah was ‘read’ publicly.