Today we will talk a bit about the structure of the Hebrew verb system in order to better understand the finer shades of the original Hebrew meanings of the scriptures. Let’s take a look at the following verse from the Book of Deuteronomy:

“You have declared today that the LORD is your God, and that you will walk in his ways, and keep His statutes and His commandments and His rules, and will obey His voice.” (Deuteronomy 26:17) 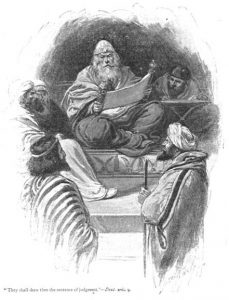 When seeing this verse in the English version, one is not aware of the usage of one of the RAREST Hebrew verbs – which appears only ONCE – in the entire Hebrew Bible! This verb is ‘He’emartah’ {האמרת} which is translated as ‘you have declared’ and according to KJV is ‘avouched.’

Due to the Hebrew root system, and unlike English or any other European languages, the structure of Hebrew contains SEVEN groups of verbs which are called ‘Binyanim’ {בניינים} (Hebrew for ‘buildings’ or ‘structures’). Each ‘Binyan’ {בניין} has a different function and when we organize the Hebrew roots according to the different ‘Binyan’ (verb groups) we get a unique meaning.

In our case, the Hebrew root of the verb ‘He’emartah’ is A-M-R {א-מ-ר} which means ‘to say’ or ‘to tell.’ Obviously, the verb ‘says’ or ‘tells’ is used very frequently in the Hebrew Bible – but in its SIMPLE-BASIC ‘Binyan’, or what we call ‘Binyan Pa’al’ {בניין פעל} (some of you know this ‘Binyan’ by its other Hebrew name which is ‘Qal’ {קל}).

Here, in the verse above, this Hebrew root (A-M-R) can be found in ‘Binyan Hif’il {בניין הפעיל}.’ Its function is ‘causing action’ or in other words, this is the ‘Binyan’ (verb group) we use when we want to express an action that is been done FOR someone else such as ‘to feed’ (e.g. to help someone who needs assistance with feeding) or ‘to dress’ (e.g. putting clothing on someone else…like a baby or little child).

This means that according to the logic of the Hebrew verb system, the Hebrew verb ‘He’emartah’ – which was translated to English as ‘you have declared’ or ‘avouched’ – is describing a process in which an action that was done by ‘you’ CAUSED or ENABLED a statute in which the ‘LORD is your God.’

What kind of action and what does it mean?

Well, the answer lies in the continuation of this verse ‘that you will walk in His ways, and keep His statutes and His commandments and His rules, and will obey His voice.’ By doing what God has commanded, you are ‘causing’ or ‘enabling’ a situation which everyone can see that the LORD is your God, or in other words DECLARING that He is your God.