The last matter of our weekly Torah portion is when Moses appointed Joshua to succeed him. Let’s have a look at the scriptures:

The original Hebrew phrase for ‘lay your hand’ is ‘Ve-Samachta Et Yadecha’ {וסמכת את ידיך}. The Hebrew root S-M-C {ס-מ-כ} (not to be confused with the Hebrew root for ‘happy’ which is spelled differently) is very interesting and can be found almost in ALL different Hebrew verb groups (‘Binyanim’): 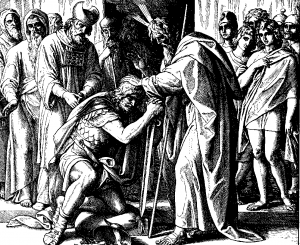 Le-Hasmich {להסמיך} (verb group ‘He’feel’ for actions performed over someone else) – means ‘to authorize’ or ‘to ordain’ and that is the common Hebrew verb to describe the action of ordaining new rabbis.’

Le-Hisamech {להיסמך} (verb group ‘Nifa’l for passive actions) – means ‘to be based on’ or ‘to be leaned on.’

When Moses laid his hand on Joshua everyone saw that Moses trusted Joshua to be his successor. Not less importantly, Joshua, by doing that, showed everyone that his basis and his foundations were based on what he learned form Moses.