As we mentioned here before the ‘Feast of Sukkot’ is celebrated for SEVEN days and is the LAST day of this holiday. This is a special day which  is known in the Jewish culture as ‘Hoshanah Rabah.’ {הושענה רבא} The meaning of the (Aramaic) term ‘Hoshanah Rabah’ is the ‘Great Supplication.’
I’m sure most you have heard of the term ‘Hoshanah’ that is derived from the Hebrew root Y-SH-A {י-ש-ע} whose initial meaning is ‘to save’ or ‘to free.’ The meaning of this Hebrew root can be used as both a tangible concept, such as in the example of a person who has been injured and is in need for rescue or in its – more common – spiritual meaning, as in the case of salvation. 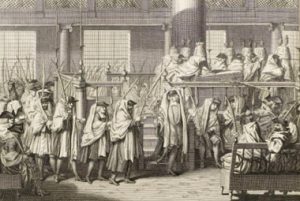 According to the Jewish tradition, the day of ‘Hoshanah Rabah’ is considered  as the ‘Final Judgment Day’ because it marks the last Day of Judgment  which began on ‘Rosh Ha-Shanah’ and culminated in Yom Kippur.

Metaphorically speaking, the ‘verdict’ that was sealed on ‘Yom Kippur’ is not “delivered” until the end of ‘Sukkot.’ This means that the last day of ‘Sukkot’ is basically the ‘last chance’ to repent and to change the verdict.

Now, it is much clearer how this day received its unique name, since it is the final day for supplications.

On the night of ‘Hashanah Rabah’ (which was last night), it is common to stay  up all night and to study the Torah as well as other selected parts of the Hebrew Bible. During the day, and especially in the morning service at the synagogue, it is customary to circle the center podium in the synagogue SEVEN times while reciting out loud a special prayer that begins with the term ‘Hashanah’ (‘please save us’).

This custom is a remembrance of a similar ritual that was performed by the priests in the Temple in Jerusalem on this VERY day. Back then, the priests circled the main altar SEVEN times while reciting the following Hebrew words: