The Bible tells us in the second chapter of the Book of Genesis about the river which flowed out of the Garden of Eden:

“A river flowed out of Eden to water the garden, and there it divided and became four rivers.” (Genesis 2:10)

The names of the first two rivers were ‘Pishon’ {פישון} and Gihon’ {גיחון} – as mentioned in the following verses:

The names of those two rivers –  ‘Pishon’ and Gihon’ – are ‘classic’ Hebrew pattern for names of rivers. Examples can be found in the names of rivers all across the Land of Israel, such as in the case of the  ‘Yarkon {ירקון} River’ which is mentioned in the Bible in the Book of Joshua, and is located today in the modern city of Tel-Aviv (very close to Jaffa, as the Bible tells us):

“And Me-Jarkon and Rakkon with the territory over against Joppa.” (Joshua 19:46)

Another example is the ‘Kidron {קדרון} River’ which is located just outside of the Old City of Jerusalem, as mentioned in the Book of II Samuel:

In other words, the Hebrew pattern for names of rivers – or any natural stream of water – is made out of two parts (*not all rivers’ names in Hebrew follow this pattern –and we will see it tomorrow). 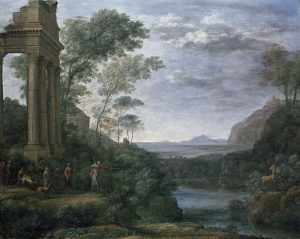 The first attribute is the composed of a Hebrew root or a Hebrew word. The second attribute is the Hebrew suffix (ending) ‘on'{ון} which is commonly used for other Hebrew names which describe things in nature such as mountains.

This means the Hebrew meaning of the name ‘Pishon’ comes from the old Hebrew root ‘P-O-SH’ {פ-ו-ש} which means ‘to jump’ or ‘to bounce’ and refers to the strong stream of the water.

The second river’s name is  ‘Gihon’ which comes from the Hebrew root ‘G-Y-CH’ {ג-י-ח} which means ‘to gush’ – and as in the case of the first river ‘Pishon’ – refers to the state of the water.

A river by the name ‘Gihon’ can be found outside of the Old City of Jerusalem today. This river is named ‘Gihon’ because of the biblical description of the crowning of King Solomon, as described in the Book of I Kings:

“And the king said to them, “Take with you the servants of your lord and have Solomon my son ride on my own mule, and bring him down to Gihon.” (I Kings 1:33)

I would like to conclude with an intriguing anecdote. Today, the Hebrew name of the Jerusalem water company is… ‘Gihon!’
In the next post I will discuss the Hebrew meanings of the other two rivers of the Garden of Eden, so please stay tuned.