Today is the second day of the Jewish New Year – ‘Rosh Ha-Shanah {ראש השנה}.’ The reason why this Jewish holiday is celebrated for TWO days instead of ONE is because of its unique and rare ‘timing’ at the first day of the Hebrew month All other Jewish biblical holidays are celebrated at the middle or end of the Hebrew month and therefore have ‘no problem’ with the appearance of the New Moon. 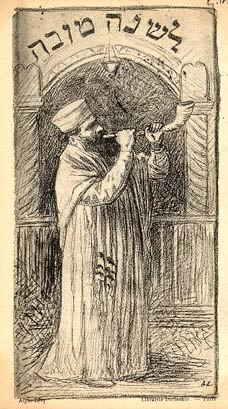 In other words, the beginning of a Hebrew month is always when there is a New Moon. In the old days, they did not know for sure on which day the New Moon would actually appear (they always had TWO possible days) and because ‘Rosh Ha-Shanah’ must be on the FIRST day of the Hebrew month (‘Speak to the people of Israel, saying, in the seventh month, on the first day of the month’) the Jewish sages decided to celebrate this holiday for TWO days.

According to the Jewish tradition, on ‘Rosh Ha-Shanah’ God created the world and it is considered as the ‘yearly judgment day’ – meaning the time of the year when God decides what will happen with all of the world in the next year (‘Yom Kippur’ is the day of the verdict).

That is the reason for the very long service at the synagogue (at least couple of hours) which are fully dedicated to praying to God, for every single thing we have in our life and to thank Him for those things specifically.

One of the most well-known prayers in the Rosh Ha-Shanah liturgical service was composed during the Middle Ages and is called ‘U-Netanneh Tokef’ {ונתנה תוקף} (‘let us cede power’) and here is an English translation of this powerful poem:

“Let us cede the power of this day’s holiness, for it is awesome and frightening. On it Your Kingship will be exalted; Your throne will be firmed with kindness and You will sit upon it in truth. It is true that You alone are the One Who judges, proves, knows, and bears witness; Who writes and seals, Who counts and Who calculates. You will remember all that was forgotten. You will open the Book of Remembrances — it will read itself – and each person’s signature is there. And the great shofar will be sounded and a still, thin voice will be heard. Angels will hasten, a trembling and terror will seize them — and they will say, ‘Behold, it is the Day of Judgment!”