The revivers of the Hebrew language were influenced by European languages (mainly Latin, German and some Russian) on the one hand but also from the languages of the Near East (mainly Aramaic and Arabic) on the other hand. The Turkish language played a role as well due to the long 400 years control over the land of Israel by the Ottoman Empire.

When the British captured the Land of Israel in 1917 and ruled the country for thirty years until the establishment of the state of Israel, Hebrew received a legal status and is used as an official language since then (together with English and Arabic). 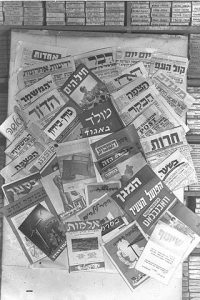 The presence of the British in the land of Israel made an impact on the Hebrew language as well and that was the source for foreign English vocabulary and not American English (today this is no longer the case and it is influenced by American English).

Modern Hebrew is another layer in the development process of the Hebrew language and it is based on all the previous stages of Hebrew throughout history.