This week ‘s ‘Haftarah’ (weekly Prophet’s portion) is taken from the Book of Zechariah (Zechariah 2:14-4:7) and talks about Joshua, the High Priest and the Menorah.

The connection between this week’s Torah portion and the weekly Prophet’s portion is that both relate to High Priests (Aaron and Joshua) and place the Menorah at the center of attention. The vision Joshua the High Priest had about the Menorah inspired the Jews throughout the long Exile, because that is how they imagined the Menorah in the third Temple in Jerusalem would be like. 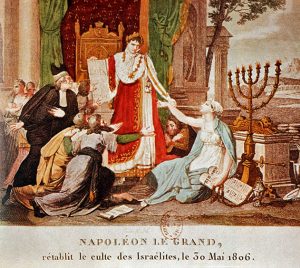 In fact, the emblem of the Modern State of Israel was inspired by this vision – as we once mentioned here. That is why the last part of the ‘Haftarah’ (weekly Prophet’s portion) is strongly associated with Jewish eschatology.

In the original Hebrew the word for ‘Branch’ is ‘Tzemach’ {צמח} which has several meanings such as a ‘plant’ or ‘sprout’. All of these Hebrew words’ meanings are connected to the concept of ‘growth.’ ‘Tzemach David’ {צמח דוד} is one of the most well-known Hebrew terms in the old Jewish literature and refers to the future coming of the Messiah – who is connected to King David.

An old Jewish tradition says that just as the ‘Tzemach’ (‘plant’ or the ‘sprout’) has roots which cannot be seen yet because they are under the ground, but they are there and are growing until one day every one will see the ‘plant so is the process of the future redemption.