The Hebrew root O-L-H (or A-L-H) {ע-ל-ה} means ‘to go up’ or ‘to ascend’ and some of you probably know this because of its appearance in the Hebrew term ‘Oleh Chadash’ {עולה חדש} which means ‘a person who immigrated to Israel’ – since the land of Israel is so holy a person ‘is ascending’ to Israel and not simply ‘immigrating’ to Israel.

‘Korban Olah’ {קרבן עולה} which literally means ‘a sacrifice/offering that goes up’ received its name because of the biblical description of the way the sacrifice ‘went up in flames’ (as a whole) and that is the reason in English it is common to translate that type of sacrifice as a ‘burnt offering’. 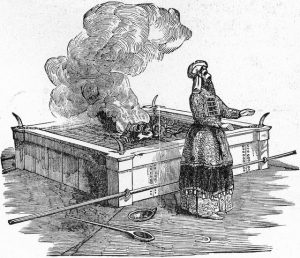 In the Old English translations of the Bible this Hebrew term was translated as ‘holocaust’ and was actually derived from the Greek translation of the Bible (‘Septuagint’). In the Greek, the word for this sacrifice consists of two parts: ‘olos’ (whole) and ‘kaustos’ (completely burnt) and simply describes the way this specific kind of sacrifice ‘went up in flames as a whole’ in accordance to the description in the original Hebrew.

Note that in Modern Hebrew the word for THE Holocaust (1939-1945) is ‘Shoah’ {שואה} which is also comes from the Hebrew Bible and means a ‘catastrophe’ or ‘disaster’ as can be found in Isaiah 47:11 for example.