During this day, it is customary to visit the military cemeteries and to take part in private remembrance gatherings. Since almost everyone in Israel served in the army, this day is one of the most important days in the Israeli calendar. 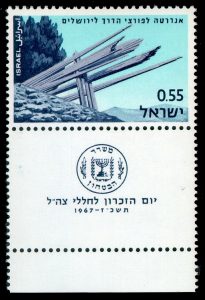 The date for this very sad day was scheduled exactly one day before Israel Independence Day and the reason is to remind us of the heavy price that was paid for the independence of the state of Israel.

A special prayer was composed for this day and here is the English translation:

“May God remember the souls of His heroic children: The fighters of the Israel Defense Forces, who fell in the wars of Israel, in defensive and security actions and during the fulfillment of their duty, including the souls of the underground fighters and brigades who fought in the national struggle – all those who sacrificed their lives for the sanctification of God’s Name. And with the help of God, the Lord of Israel’s campaigns, they brought about the revival of the nation and the state and the redemption of the land and the city of God.They were quicker than eagles and stronger than lions as they volunteered to assist the nation, and they saturated our holy land with their pure blood.
The memory of their self-sacrifice and heroic deeds will never disappear from us. May their souls be bound in the Bond of Life with the souls of Abraham, Isaac and Jacob and with the souls of the other heroes and martyrs of Israel who are in the Garden of Eden”.

Let us all say together “Amen” in honor of our fallen heroes.