Today we will discuss an ancient biblical people who were known as the ‘Rephaim’ and were mentioned in Moses’ speech in the beginning of the Book of Deuteronomy as well as in other books in the Hebrew Bible.

The Hebrew Bible tells us that they were part of the ‘Anakim’ {ענקים} – which is a Hebrew adjective that means ‘giants.’ This means that the ‘Rephaim’ {רפאים} were a nation of giants who resided mainly in the Land of Moab but also lived in other places. 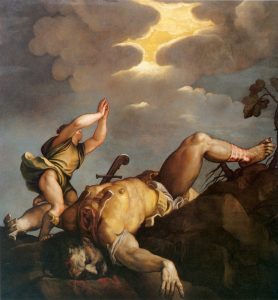 One of these of places is a little valley just outside the Old City of Jerusalem which is one of the most central areas in Jerusalem today (full of shops, coffee places and restaurants) and called ‘Emek Rephaim’ {עמק רפאים} – Hebrew for ‘the valley of the Rephaim.’

The Hebrew name ‘Rephaim’ comes from the Hebrew root R-Ph- A {ר-פ-א} which means ‘medicine,’ ‘cure’ or ‘recovery’ (the Hebrew word for ‘doctor’ is ‘Rophe’{רופא}) and associated with the common ancient belief that the ‘Rephaim’ had a special ability ‘to cure themselves and recover.’

Because of this unique feature the ‘Repahim’ are associated in other references in the Hebrew Bible with ‘Sheol’{שאול}  – an old Hebrew term for ‘death’ – as can be seen in the following example from the Book of Isaiah:

“Sheol from beneath is excited over you to meet you when you come; It arouses for you the SPIRITS OF THE DEAD, all the leaders of the earth; It raises all the kings of the nations from their thrones.” (Isaiah 14:9)

There, in the original Hebrew the phrase ‘the spirits of the dead’ is actually appears as ‘Rephaim.’ In fact, until today, in Modern Hebrew the term ‘Ruchot Repahim’ {רוחות רפאים} means ‘ghosts.’