Yesterday we talked a bit about the ‘Shemitah’ {שמיטה} (‘sabbatical year’) and today we will discuss the Hebrew meaning of the ‘Yovel’ {יובל} (‘jubilee’) as described in the Book of Leviticus:

“You shall count seven weeks of years, seven times seven years, so that the time of the seven weeks of years shall give you forty-nine years. Then you shall sound the loud trumpet on the tenth day of the seventh month. On the Day of Atonement you shall sound the trumpet throughout all your land. And you shall consecrate the fiftieth year, and proclaim liberty throughout the land to all its inhabitants. It shall be a jubilee for you, when each of you shall return to his property and each of you shall return to his clan.” (Leviticus 25:8-11) 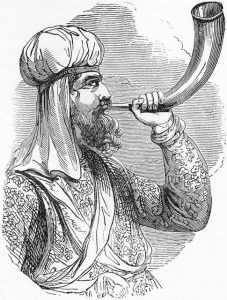 Most Hebrew scholars agree that the original meaning of the word ‘Yovel’ (Hebrew for ‘jubilee’) is ‘ram’ or ‘deer’ as can be found in the Book of Joshua:

“Seven priests shall bear seven trumpets of RAM’S horns before the ark. On the seventh day you shall march around the city seven times, and the priests shall blow the trumpets.” (Joshua 6:4)

There, the Hebrew word for ‘ram’ is ‘Yovel’ (*in the original Hebrew it is actually appears in its plural form ‘Yovelim’{יובלים}). Since this word always comes together with the word for ‘horn’- ‘Keren’ {קרן} or ‘Shofar’ {שופר} in the original Hebrew – in other cases in the Hebrew Bible it is actually referring to the ram’s horn or simply the usage of it as an instrument, as can be found in the Book of Exodus:

“When the TRUMPET sounds a long blast, they shall come up to the mountain.” (Exodus 19:13)

In the original Hebrew the word ‘trumpet’ also appears as ‘Yovel’. In other words, the fiftieth year is called ‘Yovel’ in Hebrew because of the biblical commandment – ‘On the Day of Atonement you shall sound the TRUMPET throughout all your land’.

In Biblical Hebrew this term (‘jubilee’) is ‘neutral’ and has no indication of a ‘happy event’ or a ‘celebration’. However, in Modern Hebrew, as a result of European languages’ influence, one can use the word ‘Yovel’ as ‘an anniversary of a round number’, for example: ‘Yovel Ha-Shivim Le-Medinat Yisrael’ {יובל השבעים למדינת ישראל} – which means ‘State of Israel’s 70th anniversary.’