The famous Seven Species that the Land of Israel was blessed with perpetually are mentioned in our weekly Torah portion:

“For the LORD your God is bringing you into a good land, a land of brooks of water, of fountains and springs, flowing out in the valleys and hills, a land of wheat and barley, of vines and fig trees and pomegranates, a land of olive trees and honey, a land in which you will eat bread without scarcity, in which you will lack nothing, a land whose stones are iron, and out of whose hills you can dig copper. And you shall eat and be full, and you shall bless the LORD your God for the good land He has given you.” (Deuteronomy 8:7-11) 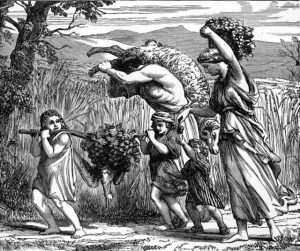 In Hebrew the Seven Species are called ‘Shiv’at Ha-Minim’ (שבעת המינים) and according to the old Jewish culture each species symbolizes a unique quality:

‘Chitah’ (חיטה)– Hebrew for ‘wheat’ is important because of the bread which is produced out of it. The bread – food in general – is what is needed to sustain LIFE in both the corporeal and spiritual realms.

‘Seorah’ (שעורה)– Hebrew for ‘barley.’ In ancient times, barley was used as animal’s food and therefore represents STRENGTH and HARD WORK (the livelihood of a person in ancient times was dependent on the livestock).

‘Gefen’ (גפן)– the Hebrew word for ‘grapevine’. Its product – the ‘fruit of the vine’ is used for special events and celebrations and therefore stands for HAPPINESS.(‘And wine to gladden the heart of man.’ (Psalms 104:15)

Te’enah (תאנה)– Hebrew for ‘fig.’ Unlike other fruits, that have only ONE fruit-picking season, the fig trees ripen two or three times each year. Because of this unique feature, the fig stands for PERSISTENCE.

Rimon (רימון) –’pomegranate’ in Hebrew, is a fruit which is characterized by the multiple little seeds it has inside of it and therefore ‘reminds’ us to perform multiple GOOD DEEDS.

‘Zait’ (זית)– Hebrew for ‘olive.’ The olive is known for its various usages other than food, such as for cooking, medicine and lighting. The olive tree can live and thrive for centuries and even longer (in Jerusalem there are olive trees alive today dating back to the first century!) and because of that it represents WISDOM and EXPERIENCE.

‘Tamar’ (תמר)– the Hebrew word for ‘date.’ The only species that is not mentioned by its name but rather as ‘honey’ – which refers to the honey that was made from the fruit (in Hebrew we call it ‘Silan’). The date tree or more commonly known as a ‘palm tree’ grows tall and straight without spreading to the sides as other trees and therefore represents DECENCY and HONESTY (the Hebrew word for ‘honest’ and for ‘straight line’ is the same ‘Yashar’ – which is also a synonym for a righteous person).

The number seven is a special number in Judaism and we have previously discussed it. This number represents completeness, as can be found in the seven days of the week and the seven-lamp Menorah in the Temple, for example.

If you go back to the verses above, the ones that appear in the beginning of this post, and have a closer look you will discover something extremely fascinating! The word ‘land’ (‘Eretz’ {ארץ} in Hebrew) appears SEVEN times in the verses that speak about the virtues of the Land of Israel!