Today is the 14th of the Hebrew month of Adar {אדר} (the twelfth and last month in the Hebrew calendar).

Approximately 2500 years ago, the miraculous story of Esther{אסתר} and Mordechai {מרדכי} took place as recorded in the Bible in the Book of Esther:

“Therefore they called these days Purim, after the term Pur. Therefore, because of all that was written in this letter, and of what they had faced in this matter, and of what had happened to them, the Jews firmly obligated themselves and their offspring and all who joined them, that without fail they would keep these two days according to what was written and at the time appointed every year, that these days should be remembered and kept throughout every generation, in every clan, province, and city, and that these days of Purim should never fall into disuse among the Jews, nor should the commemoration of these days cease among their descendants.” (Esther 9: 26-29) 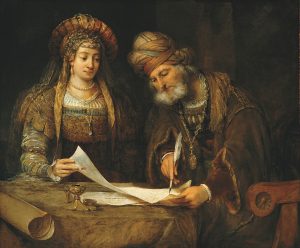 The term ‘pur’ {פור} means ‘lot’ and ‘Purim’ {פורים} is the Hebrew plural form of ‘pur’ – meaning ‘lots’. This word originated from Akkadian and it describes some kind of ‘dice’ which was used for casting lots during ancient times.

Purim is probably the most joyful holiday among the Jewish holidays. If you ever happen to find yourself in Israel during Purim, you will quickly notice the special atmosphere in the streets and will see both children and grownups wearing costumes (a bit like Halloween).

It is also customary to celebrate by having a big festive meal.
The main event of Purim is the gathering at the synagogue to listen to ‘Kriaht Hamegila’ {קריאת המגילה} which is Hebrew for ‘reading of the scroll.’ The Book of Esther, which according to Jewish tradition is always read from a scroll (similar to the Torah scroll). The entire book of Esther is sung in a special happy melody.

But not everyone celebrates Purim today. In Jerusalem for example, the Festival of Purim will be celebrated only tomorrow – why is that?
The answer will be in tomorrow’s post…