Yesterday we talked a bit about the original Hebrew meaning of the word ‘Nachash’ {נחש}  which was translated to English as ‘serpent’ which can be found in the third chapter of the Book of Genesis. Today I would like to discuss one of the most intriguing verses of the Hebrew Bible, the one which describes the future encounter between the ‘Nachash’ (serpent) and man, as described in Genesis:

“And I will put enmity between you and the woman, and between your offspring and hers; he will crush your head, and you will strike his heel.” (Genesis 3:15)

When reading these words in the original Hebrew, one cannot ignore the unique, highly-sophisticated poetic language the Hebrew Bible uses. Even if you do not know Hebrew, this still stands out and that is why I would like to highlight the ending of this verse as it appears in the original Hebrew ‘he will crush your head, and you will strike his heel.”  In the original Hebrew it says, ‘Hu Yeshufcha Rosh Ve-Atah Teshufenu Akev.’ {הוא ישופך ראש ואתה תשופנו עקב} 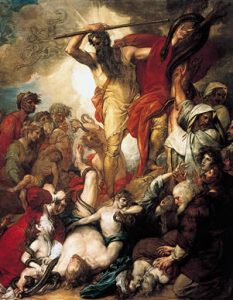 It is clear the Bible uses some kind of a Hebrew play on words. The question becomes, “What  does it mean exactly? ”

This linguistic phenomenon is called  a ‘homonym’ (Greek for ‘having the same name’ or ‘having a common name’), and is used to describe two words which sound the SAME but have a completely DIFFERENT meaning.

In Semitic languages, this phenomenon can also be found in roots and not just in random words like in other languages. Here, in this verse, we have a classic case of a ‘homonym’ – since the two Hebrew verbs ‘Yeshufcha’ {ישופך}  and ‘Teshufenu’ {תשופנו} may sound the same and may appear as having the same root  but they have different etymology.

In other words, these two words not only sound the same but they also share the SAME Hebrew root and yet they have DIFFERENT meanings – what a rare situation!

The verb which speaks about the snake – translated to English as ‘to strike’ – derives from the Hebrew root ‘Sh-U-F’ {ש-ו-פ} and it is an extremely rare verb to find in the Hebrew Bible. It appears ONCE in the Book of Jeremiah:

“Wild donkeys stand on the barren heights and PANT like jackals; their eyesight fails for lack of pasture.” (Jeremiah 14:6)

The verb ‘pant’ appears in the original Hebrew as ‘Sha’afu’ {שאפו} which derives from the SAME Hebrew root of the verb that speaks about the snake and refers to the ‘panting-like’ noise (like a warning) the snake produces before it strikes or bites.

“Hear this, you who TRAMPLE the needy and do away with the poor of the land…” (Amos 8:4)

The verb ‘trample’ appears in the original Hebrew as ‘Ha-Shoa’fim’ {השואפים} which derives from the same Hebrew root of the verb that speaks about the man and refers to a metaphoric way of ‘stepping’ on someone – or in other words to crush them.

What is truly amazing about this entire thing – from the pure language perspective – is the genius usage of two verbs that sound the same, share the same root and ALSO make perfect sense.

It is as if the Bible speaks about some sort of balance of powers – because it describes a situation in which the snake is ABOUT to strike man’s heel (or just barley managed
to do that) and exactly then man TRAMPLES the snake and CRUSHES it!

In other words, the snake will attack first, but don’t lose hope because man will have the upper hand and will CRUSH the snake!