In the last post, we discussed the important question as to why God FAVORED Abel’s offering and REJECTED Cain’s offering. I explained the finer shades of the original Hebrew which indicated that Abel was FORCED to be a shepherd while Cain was happy with the fact he was a farmer by CHOICE.

Today we will continue with the answer to the question above and see the difference between Abel’s offering and the one of Cain. First,  let’s have a look at the scriptures:

“…Now Abel kept flocks, and Cain worked the soil. In the course of time Cain brought some of the fruits of the soil as an offering to the LORD. And Abel also brought an offering—fat portions from some of the firstborn of his flock. The LORD looked with favor on Abel and his offering, but on Cain and his offering he did not look with favor. So Cain was very angry, and his face was downcast.” (Genesis 4:2-6) 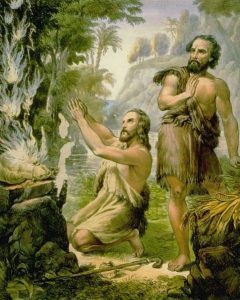 If you have a closer look at these verses you will notice that Cain brought ‘some of the fruits of the soil as an offering to the LORD’ while Abel brought ‘fat portions from some of the firstborn of his flock.’

So where is the problem? Cain was a farmer and Abel was a shepherd so it only makes sense each would bring an offering from his ‘line of work.’

Now the picture is very clear. Abel who was the complete opposite of Cain (see previous posts) was not interested in materialism at all. Abel, as his original Hebrew name suggests (‘Hevel’ {הבל}), was not after gaining more power and property – he was not after any of the ‘pleasures’ of this world as his brother Cain was. Cain, who as his original Hebrew name suggests, was all about materialism (the Hebrew word for ‘property’ is ‘Kinyan’ {קניין} which is very close to his Hebrew name ‘Kain’ {קין}).

Cain was so completely obsessed with materialism that he did not even bring an offering before God from his OWN property! Cain’s materialism is fully demonstrated by the fact that even though he was the brother who had MORE property (he was born the firstborn and received the land), he did not give of HIS BEST. Abel, on the other hand, did not possess as much as a shepherd and yet he brought the very BEST part of what he had as an offering before God.

Moreover, in the original Hebrew it is written ‘Ve-Hevel Hevi Gam Hu’ {והבל הביא גם הוא} which was translated as ‘and Abel also brought’ but can also be translated, as some of the Jewish Bible commentators have written  ‘and Abel brought also HIMSELF’.

In other words, not merely that Abel had LESS materially than his brother Cain and yet he brought MORE, he also brought HIMSELF – meaning, he put his soul into this offering while Cain did the absolute minimum.