The famous story of Cain and Abel eventually ended with the killing of Abel by his brother Cain. Here is the biblical reference:

Now, let’s compare this verse with the words which appear in the King James Version:

There are very clear differences between the two versions. In the first one, the NIV (New International Version) outlines the words of Cain to Abel while the KJV (King James Version) does not mention anything at all on this matter. This difference derives from the fact that allegedly there is a ‘gap’ in the original Hebrew, and it is not clear what Cain actually said to Abel before he killed him. 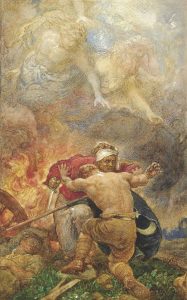 However, it appears that the popular and relatively new Bible translation (NIV) took the liberty ‘to fill in the gap’ and added its interpretation as to what Cain said to Abel before he killed him using the phrase, “Let’s go out to the field” which is nowhere to be found in the original Hebrew!

Generations upon generations of Jewish Bible commentators have discussed this mysterious issue and have tried ‘to fill in this gap’ as well; and interestingly enough, some have also connected between the ‘field’ to what Cain said to Abel.

One very interesting old Jewish interpretation actually places the ‘field’ at the center of attention and even suggested that this was the trigger to the killing of Abel.  This old Midrash (Jewish lesson) explains that the two brothers had a dispute in which Cain said to Abel:

“Let’s divide the world between us, I will take all the land and you will have all the other property.”

This was because Cain was a farmer (land) and Abel was a shepherd (property). Immediately afterward, when they were in the FIELD, Cain continued and said to Abel:

“You are standing on MY land!” and Abel replied: “You are wearing MY wool!”

And at this point, the third part of the verse enters the picture:

“…Cain attacked his brother Abel and killed him.”