Tomorrow’s ‘Parashah’ {פרשה} (weekly Torah portion) is ‘Ha’azinu’ {האזינו} (Hebrew for ‘listen’). This is the tenth ‘Parashah’ in the Book of Deuteronomy and can be found in Deuteronomy 32:1–52.

The name of the weekly Torah portion comes from the first two words (in the English translation) of the opening verse: 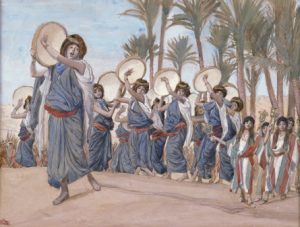 In the original Hebrew the phrase ‘give ear’ appears as ONE word which is our weekly Torah portion’s name ‘Ha’azinu.’ {האזינו} Interestingly, the meaning of the Hebrew word ‘Ha’azinu’ is simply ‘listen’, however the English translators chose TWO words (‘give ear’) instead of ONE word (‘listen’) – even though the Old Latin translation (which was one of the sources for the English translation) used only ONE word – ‘audite’ – which is the Latin word for ‘to hear’ and the origins of the word ‘audio.’

*A nice anecdote: During medieval times, when inspectors of the government (in Britain) came to check the financial activities of a business, the owners of the business read from their books out loud for the inspectors and that is the reason for the use of the modern English term ‘auditing.’

The English translators used TWO words because of the deeper Hebrew meaning of the word ‘Ha’azinu’ that comes from the Hebrew word ‘Ozen’ {אוזן} which means ‘ear.’

In other words, the Hebrew concept of ‘listening’ comes from the Hebrew word for ‘ear’ (‘Ozen’). Both words (‘Ozen’ and ‘Ha’azinu’) derived from the same Hebrew root ‘A-Z-N’ {א-ז-נ} which also means ‘balance’ as can be found in the Hebrew word ‘Eizun.'{איזון}

The Biblical Hebrew logic (and following the same concept also in Modern Hebrew) sees the ear as the organ that is in charge of balance BEFORE its other function of ‘hearing.’

From the same Hebrew root ‘A-Z-N’ comes another word which according to the Hebrew logic is strongly connected to ‘balance’ and that is the Hebrew word ‘Moz’nayim’ {מאזניים} which means ‘scales.’

When Moses sang his song (these verses are also known as ‘Song of Moses’) he used a sophisticated double meaning Hebrew verb, whose initial meaning is ‘listen’ or ‘give ear’ – as appears in the English translation – and its other meaning is ‘to balance.’ Moreover, it can also be understood as a ‘request’ from heavens to balance between the good and bad things Israel did so when they went to the next step of entering the Promised Land they could open a new page and start fresh…