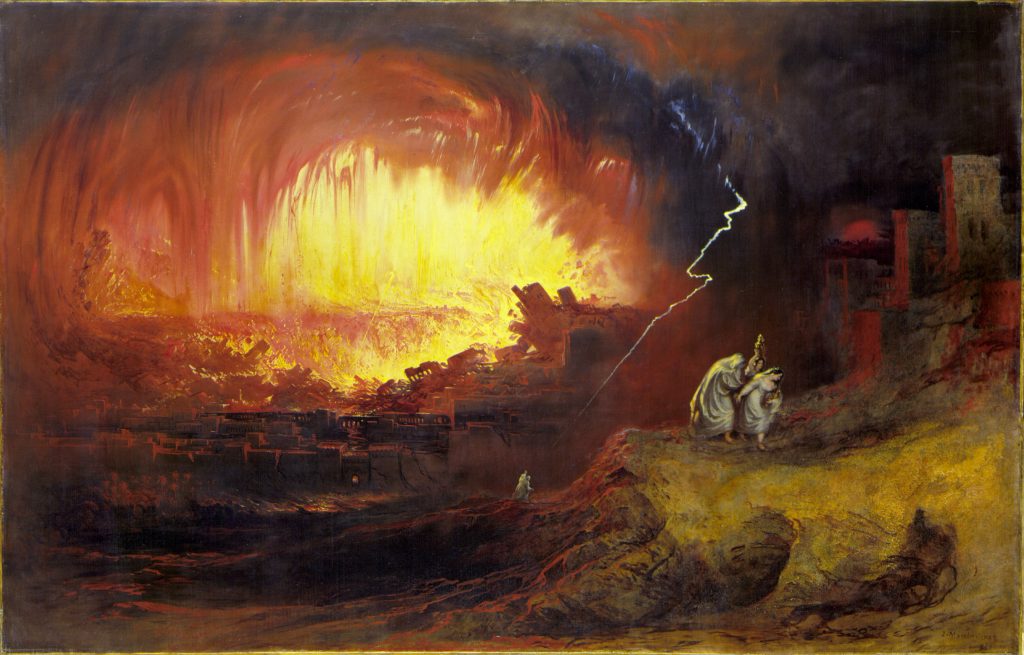 The third chapter of the Book of Genesis ends with the description of Adam and Eve’s expulsion from the Garden of Eden:

“So the LORD God banished him from the Garden of Eden to work the ground from which he had been taken. After he drove the man out, he placed on the east side of the Garden of Eden cherubim and a flaming sword flashing back and forth to guard the way to the tree of life.”
(Genesis 3:23-24)

The biblical description is very intriguing because it mentions the measures that were taken in order ‘to guard the way to the tree of life’ which were “cherubim and a flaming sword flashing back and forth.”
The original Hebrew word for ‘cherubim’ is ‘Keruvim’ {כרובים} (which is the Hebrew plural form of ‘Keruv’ {כרוב}) and refers to a particular type of angels commonly known by their ‘child-like facial features.’

According to the ancient Jewish literature this term – ‘Keruv’ – comes from the old and rare Aramaic phrase ‘Kerabia’ {כרביא}which means ‘like a child’ and this is probably the reason why the ‘cherubim’ were represented in the Christian European culture as angels who look like children.

The Bible tells us that besides the ‘cherubim’ there was also ‘a flaming sword flashing back and forth to guard’ which appears in the original Hebrew as ‘Lahat Ha-Cherev Ha-Mit’hapechet.'{להט החרב המתהפכת}
The Hebrew word ‘Lahat’ {להט} was translated as ‘flaming’ and has a strong connection in Hebrew to the ‘supernatural’ and ‘fire’ as can be found in the following example from Exodus:

“Pharaoh then summoned wise men and sorcerers, and the Egyptian magicians also did the same things by their secret arts” (Exodus 7:11)

There the original Hebrew word for ‘secret arts’ is ‘Lahatem’ {להטיהם} which derives from the same Hebrew root as ‘Lahat’ (L-H-T {ל-ה-ט}).

The English translation has encountered a difficulty in translating the unique Hebrew verb ‘Le-Hitapech’ {להתהפך} (appears in the translation as  ‘flashing back and forth’) because it has MORE than one meaning.

In fact, this Hebrew verb is describing ALL different forms of shifting from one situation to the complete opposite of it.
In other words, this Hebrew verb means ‘to turn inside out’ or ‘to turn upside down’, ‘reverse’ or ‘turn backward’ and it is found in the Hebrew verb group (‘Binyan'{בנין}) which indicates ‘a process.’

That means that if one reads this description in the original Hebrew, one gets the notion that the ‘cherubim’ are holding a sword which is made out of some kind of a supernatural fire and this sword is found in a constant state of shifting – upside down, inside out and back and forth.

The common perception among Biblical Hebrew scholars is that this extraordinary biblical description is in fact a description of heavenly…lightning!