Even though the Hebrew meaning of the word ‘Torah’ is ‘teaching,’ the Hebrew verb for ‘teaching’ (‘Melamed’ ‘מלמד’) will make its FIRST appearance out of all five books only in the last book – the Book of Deuteronomy:

“And now, O Israel, listen to the statutes and the rules that I am TEACHING you, and do them, that you may live, and go in and take possession of the land that the LORD, the God of your fathers, is giving you.” (Deuteronomy 4:1) 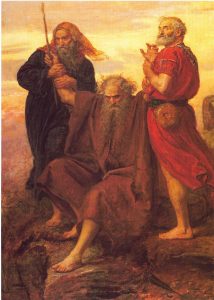 The SECOND appearance of the Hebrew verb for ‘teaching’ can be found just couple of verses after the first appearance:

“See, I HAVE TAUGHT you statutes and rules, as the LORD my God commanded me, that you should do them in the land that you are entering to take possession of it.” (Deuteronomy 4:5)

This verse ‘confused’ the Bible translators as well as some of the Bible commentators who noticed that the Bible used the PAST form – ‘Limadeti’ (‘I have taught’ למדתי) – even though the ‘act of teaching’ had not yet taken place and is about to come next. This can be seen in the Ten Commandments, for example, which can be found in the NEXT chapter.

Actually, there is no problem whatsoever since using the PAST form for expressing present and even future statements is a common practice in Biblical Hebrew and can be found many times in the Hebrew Bible in general and the Book of Deuteronomy in particular.

In this case the Hebrew verb ‘Limadeti’ comes together with another Hebrew verb ‘Re’eh’ (‘see’ ‘ראה’) and really means that Moses declared that ‘He is about to teach.’

The Hebrew verb ‘to teach’ (‘Le-Lamed’ ‘ללמד’) is very common in the Book of Deuteronomy and implies the nature of this intriguing biblical book which is focused on teaching the statutes and the rules of God.

Because of that (and also other issues), Moses is known in the Jewish tradition as ‘Moshe Rabenu’ (משה רבנו) – ‘Moses our Rabbi’, meaning a ‘Great Teacher.’

In fact, one of the most compelling pieces of evidence for the special status Moses had as the ‘Great Teacher’ can be found in the New Testament, in the Book of Acts:

“For from ancient generations Moses has had in every city those who proclaim him, for he is read every Sabbath in the synagogues.” (Acts 15:21)

This verse refers to the ancient Jewish custom of the Rabbi’s special seat at the synagogue which called “Moses’ Seat’:

“Then Yeshua (Jesus) said to the crowds and to His disciples, “The scribes and the Pharisees sit on Moses’ seat.” (Matthew 23:1-2)