Every year on the second day of ‘Chol Ha-Moed’ {חול המועד} (‘weekdays of the holiday or festival’) of Passover the traditional ‘Birkat Kohanim’ {ברכת כהנים} – Hebrew for the ‘Priestly Blessing’ – takes place at the Western Wall in the Old City of Jerusalem. 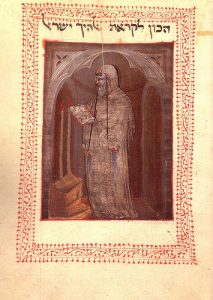 More than 70,000 people from all around the world gathered at the Western Wall today, to witness and to take part in this extraordinary sight! It only happens TWICE a year: during the festival of Passover and during Succoth (The Festival of Tabernacles).

The ‘Kohanim’ {כהנים} – the priests from the Tribe of Levi have been divinely chosen to work in the Temple in Jerusalem and to bless the people of Israel. The origin of this ‘priestly blessing’ is found In the Book of Numbers:

“The LORD spoke to Moses, saying, “Speak to Aaron and his sons, saying, Thus you shall bless the people of Israel: you shall say to them, The LORD bless you and keep you; the LORD make his face to shine upon you and be gracious to you; the LORD lift up his countenance upon you and give you peace. “So shall they put my name upon the people of Israel, and I will bless them.” (Numbers 6:22-27)

An interesting anecdote is that about five years ago, the well-known singer Leonard Cohen (Hebrew for ‘Priest’) gave a concert in Israel. At the end of that concert, he recited (in Hebrew!) the ‘priestly blessing’.