‘Nazirite’ is ‘Nazir’ (נזיר) in the original Hebrew and it is derived from the Hebrew root N-Z-R (נ-ז-ר) which means ‘to separate oneself’ as can be seen in the following verse:

“And the LORD spoke to Moses, saying, “Speak to the people of Israel and say to them, when either a man or a woman makes a special vow, the vow of a Nazirite, TO SEPARATE HIMSELF to the LORD” (Numbers 6:1-2). 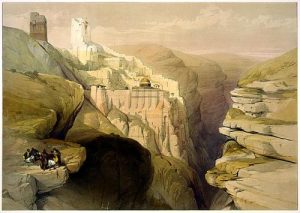 In order ‘to separate oneself to the Lord’ one needs to abstain from certain things (such as wine) and stay away of the dead, as can be seen in Numbers:

“He shall separate himself from wine and strong drink. He shall drink no vinegar made from wine or strong drink and shall not drink any juice of grapes or eat grapes, fresh or dried. All the days of his separation he shall eat nothing that is produced by the grapevine, not even the seeds or the skins. “All the days of his vow of separation, no razor shall touch his head. Until the time is completed for which he separates himself to the LORD, he shall be holy. He shall let the locks of hair of his head grow long. “All the days that he separates himself to the LORD he shall not go near a dead body.” (Numbers 6:3-7)

In fact, the Hebrew word for ‘abstain’ comes from the same root as ‘Nazir.’ The root is N-Z-R, as can be seen in Zechariah:

“Saying to the priests of the house of the LORD of hosts and the prophets, “Should I weep and ABSTAIN in the fifth month, as I have done for so many years?” (Zechariah 7:3)

There the original Hebrew word for ‘abstain’ is ‘Henazer’ (הנזר). In Biblical Hebrew, this term can be used also as a metaphor for someone who is separated from his family, as can be seen in Joseph’s case:

“The blessings of your father are mighty beyond the blessings of my parents, up to the bounties of the everlasting hills. May they be on the head of Joseph, and on the brow of him who was SET APART from his brothers.” (Genesis 49:26)

Over the years, the phenomenon of being a ‘Nazir’ became less popular within the Jewish world, but gained much popularity in medieval Europe, among the Christian society (I’m talking about monks and nuns).

In medieval Hebrew (yes, Hebrew was also used during the Middle Ages) the word for ‘monk’ was ‘Gala’ch’ (גלח) which suggests the monk’s special haircut (‘tonsura’ in Latin). Interestingly, in Modern Hebrew the monks are called ‘Nazir’ and the nuns are called ‘Nezirah (נזירה).” The nun (which is, ironically in this case, the feminine form of ‘Nazir’) sounds like ‘the monk’s wife in Hebrew.’

The Hebrew language uses well-defined patterns in order to clarify what exactly is the meaning of the word. In other words, in Hebrew, there is a unique pattern for places so it means that if one uses the root N-Z-R in the ‘place pattern’ – which is ‘Minzar’ (מנזר) – the result is the Hebrew word for ‘monastery’, the place which is associated with the ‘Nazir’ (‘monk’)