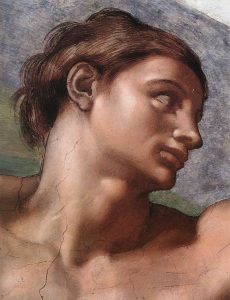 In the last week, we have dealt with the creation of man and especially with the well-known biblical verse:

“Then God said, “Let us make man in our image, after our likeness. And let them have dominion over the fish of the sea and over the birds of the heavens and over the livestock and over all the earth and over every creeping thing that creeps on the earth.” (Genesis 1:26)

Many Hebrew Bible scholars have tried to understand what the original Hebrew words ‘Tzelem’ {צלם} (that was translated to English as ‘image’) actually means.

According to the Jewish philosophical perspective, it means that man received ‘divine’ tools which cannot be found in any other living creature.

Following this idea, medieval Jewish philosophers, who were a Hebrew Bible scholars as well, have raised different theories and interpretations with regard to what kind of ‘divine tools’ mankind possesses.

According to one – very popular – opinion the ‘Tzelem’ refers to the inner part of man which is the soul. Because the soul is the man’s spiritual and metaphysical part which is immortal and stays forever it can therefore qualify as ‘in the image of God.’

One of the more outstanding medieval Jewish philosophers was the ‘RAMBAM’ {רמב”ם} or Maimonides (lived in Spain and Egypt during the 12th century) who explained this matter by using the NEXT word which appears immediately after ‘Tzelem’ and this is the Hebrew word ‘Demut'{דמות}  which was translated to English as ‘likeness.’

Maimonides ties the TWO Hebrew words  – ‘Tzelem’ and ‘Demut’ – together and interprets the word ‘Demut’ as ‘resemblance’ or ‘similarity’ based on the Hebrew adjective ‘Dome’ which means ‘similar’ and is derived from the same Hebrew root as ‘Demut’ – ‘D-M-H.'{ד-מ-ה}

And that is why Maimonides stated that ‘Tzelem’ refers to the nature of man (the way man behaves) while ‘Demut’ describes man’s mind – which is similar (in a way) to the ‘divine mind’ due to its ability to think and to understand more complex things which is a capability unique to man.