‘Parashat Balak’ {פרשת בלק} – the weekly Torah portion of ‘Balak’ – refers to the story of the King of Moab Balak Ben Zippor {בלק בן ציפור} (‘Balak son of Zippor’) and can be found in the Book of Numbers 22:2–25:9.

The well-known rabbi Judah Loew, son of Bezalel (AKA the Maharal of Prague who lived there during the 16th century) noticed a mysterious phenomenon which can be found in the original Hebrew names of the last THREE weekly Torah portions: ‘Korach’ {קורח}, ‘Chukat’ {חוקת} and ‘Balak.’ {בלק} 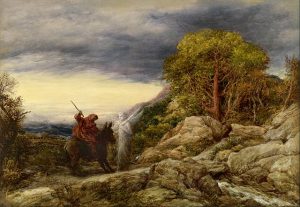 Many of you probably recognize another Hebrew word that comes from the same root – ‘Kadosh’ {קדוש} (which means ‘holy’) and its appearance in different position in each word represents the following:

When it appears in the middle, like in the case of ‘ChuKat,’ it is because the main issue of this Torah portion is the ritual law of the ‘Parah Adumah’ (Hebrew for ‘red heifer’) and the order of things began with the impurity (of the dead), then comes the purification as a result of the sacrifice of the red heifer and at the end the impurity is back: “And the one who gathers the ashes of the heifer shall wash his clothes and be unclean UNTIL EVENING.” (Numbers 19:10). In this case, the ‘holy’ part is in the middle.

When it appears at the end like in the case of ‘BalaK’ it is because Balak the son of Zippor was a bad person according to the story in the Book of Numbers and yet, according to the Jewish tradition, at the end of his days Balak has repented. Because of his repentance, one of his descendants was Ruth (AKA in the Jewish literature as ‘Ruth the Moabite’). In Balak’s case, the ‘holiness’ came at the end.