This “parasha” continues where we left off two weeks ago after the completion of the seven day ordination of the “Kohanim” {כהנים} (‘priests’) to work at the Tabernacle, and that is the reason for the ‘Parasha’s name’ – ‘on the eight day’.

According to ancient Jewish teachings, the number eight (‘Shemone’ {שמונה} in Hebrew) symbolizes the ‘supernatural.’ Number seven, for example, represents completeness (seven days of the week for example) within the boundaries of this world, while the number eight is above that.

The well-known 16th century Rabbi Maharal of Prague {מהר”ל מפראג} explained this concept in the following way – in geometry, how many sides does a cube have?

Well, the most common answer will be six. However the Maharal mentioned the ‘inner side’ (he uses the term ‘the heart of the cube’) which makes it seven, so it is complete now ( like the features of number seven) but still within the boundaries of this world. 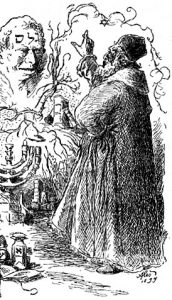 However, the ‘hidden side’, the side that we cannot see and grasp in our minds, is the eighth and represents the side of everything in this world that is above nature or simply perceives as supernatural to us.

The seven days of ordination of the priests were engulfing their training to work in the Tabernacle – that was within the boundaries of this world (again, like the features of number seven). However, now starting the EIGHTH day they are actually serving God and not just in theory so it turned to the other dimension – which is represented by the number eight.