After the Israelites left Mount Sinai, they started to complain about life in the desert and said the following:

“Now the rabble that was among them had a strong craving. And the people of Israel also wept again and said, “Oh that we had meat to eat! We remember the fish we ate in Egypt that cost nothing, the cucumbers, the melons, the leeks, the onions, and the garlic.” (Numbers 11:4-5) 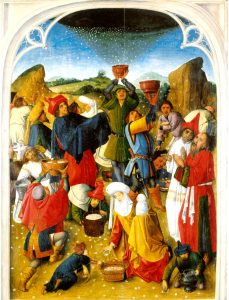 In an interesting Midrash (an old Jewish lesson), there is a question about the following sentence: ‘we remember the fish we ate in Egypt that cost nothing’ – how can it be? We all remember what Pharaoh said in theBook of Exodus:

“Go now and work. No straw will be given you, but you must still deliver the same number of bricks.” (Exodus 5:18)

Meaning, they did not even get straw for ‘no cost’ so how did they get fish and other good food at ‘no cost?’

In the original Hebrew the word ‘Chinam’ (חינם) was translated to English as ‘cost nothing’. This Hebrew word literally means ‘free’ in the sense of free of charge – meaning, to receive something without having to give anything in return.

The Midrash gave an answer to the previous question, by using the extended meaning of the Hebrew word ‘Chinam,’ and says that they do not speak about ‘free’ in the sense of money (no need to pay) – because we have just witnessed what Pharaoh said to them while they were in Egypt (‘No straw will be given you’).

The real meaning of ‘Chinam’ in this case is that while they were in Egypt, no one told them how to behave and let alone gave them a law (the Torah). But now after the Torah was given in Mount Sinai that is not the case anymore.

In other words, the phrase ‘costs nothing’ in this case refers to life of ‘free’ of God’s commandments which they had in Egypt before the Torah was given at Mount Sinai…