As mentioned in the first post about Passover, one of the main rituals of the first night of this holiday is reading the ‘Haggadah.’ {הגדה}

The ‘Haggadah’ was composed in the first century (AD) and absorbed a couple of additions over the years, mainly during medieval times. The main theme of this book is the story of the Exodus of the children of Israel from Egypt. 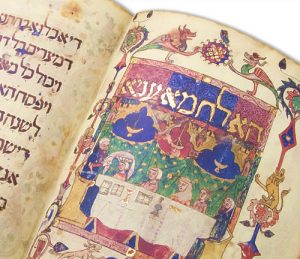 ‘Haggadah’ means in Hebrew simply ‘telling’ and it comes from the biblical command: “You shall TELL your son on that day, ‘It is because of what the LORD did for me when I came out of Egypt.’” (Exodus 13:8).

The Hebrew language has several different verb forms for the concept of ‘telling.’ The specific form used in our case ‘le-Hagid’ {להגיד} (‘to tell’) appears in the Hebrew Bible almost always when there is a novelty – meaning when the story in the Bible suggests a new ‘discovery’ or a new ‘revelation.’ For example ,in the case of Adam and Eve, when they first became aware of their nakedness and hid themselves from God:

“He said, “Who TOLD you that you were naked? Have you eaten of the tree of which I commanded you not to eat?” (Genesis 3:11)

Or in the case of the well-known prophecy of Isaiah:

“Behold, the former things have come to pass, and new things I now declare; before they spring forth I TELL you of them.” (Isaiah 42:9).

In the ‘Haggadah’ case, the novelty lies in the old Jewish saying:

“In every generation, one must see himself as if he has gone out of Egypt.”

In other words, every year at Passover when reading the ‘Haggadah’ we are not just simply talking about the past, but rather about the present deliverance of God.