Following the rejected offering, God’s words to Cain are very intriguing and absolutely outstanding from the Hebrew language perspective. Today’s post will highlight the reasons why the words are so remarkable.

Here are the verses:

“Then the LORD said to Cain, Why are you angry? Why is your face downcast? If you do what is right, will you not be accepted? But if you do not do what is right, sin is crouching at your door; it desires to have you, but you must rule over it. (Genesis 4:6-8) 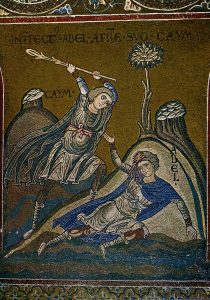 In the last post, we mentioned the original Hebrew for the English phrase ‘be accepted’ which appears in the original Hebrew as ‘Set’ {שאת} and bears several meanings.  The initial meaning of the Hebrew root of this word ‘N-S-A’ {נ-ש-א} means ‘to bear’ or ‘to carry’ and usually refers to heavy burdens as can be found in the following moral and biblical example:

“If you see the donkey of someone who hates you fallen down under its load, do not leave it there; be sure you help them with it.” (Exodus 23:5)

There, the original Hebrew word for ‘load’ is ‘Ma’sao’ {משאו} which derives from the same root as ‘Set’. {שאת} But as we have already seen, this fascinating Hebrew root/word has also a more figurative meaning that is associated with ‘lifting.’

The logic behind it is that when one is performing the action of carrying or loading things, those items are lifted up in the air and are now higher than where they were before and thus associated (according to the Hebrew way of thinking) with ‘HEIGHT.’

Now, from the same verse found in the Book of Exodus that we have just seen, there is another fascinating Hebrew word ‘Rovetz’ {רובץ} that was translated to English as ‘fallen down’ and refers to the physical situation of the donkey (in our case) in which it absolutely cannot carry the heavy load so it simply ‘collapsed’ and was found lying down on the ground.

However, according to the Hebrew way of thinking, there is another scenario in this biblical description. In this scenario, the donkey has not risen up in the first place and was simply laying there on the ground without the intention of getting up. Since the other meaning of this Hebrew word ‘Rovetz’ is the OPPOSITE of getting up or standing, it is associated with laying down.

The reason why I elaborated about this story with the donkey and the load is because the SAME Hebrew word ‘Rovetz’ {רובץ} can be found in God’s words to Cain that were translated to English as  ‘sin is crouching at your door.’  There the English phrase ‘is crouching’ and it appears in the original Hebrew as ‘Rovetz’.’

Interestingly, form the original Hebrew perspective, we are witnessing here a one-of-a-kind extraordinary DOUBLE meaning usage of the Hebrew word ‘Set’ and its opposite ‘Rovetz.’

God’s words to Cain describe a situation in which if Cain will CHOOSE to act rightly, he will not just manage ‘to carry’ or ‘hold’ his life but also be ‘lifted’  to new heights and come out on on top.

However, if Cain was to choose to act wrongly, he will not simply fall down and collapse but it is guaranteed that as long as he continues doing the wrong things he will always ‘stay on the ground’ and be at the bottom.

And now the ending of God’s words is becoming even clearer and more powerful than before as it describes the struggle between right and wrong:

“It desires to have you, but you must rule over it.”