“Then the LORD said to Cain, “Why are you angry? Why is your face downcast? If you do what is right, will you not be accepted? But if you do not do what is right, sin is crouching at your door; it desires to have you, but you must rule over it.” (Genesis 4:6-8)

These powerful words hold much deeper theological and philosophical insights which we will discuss very soon. However, for today, I would like to talk about ONE very interesting word which has multiple meanings and layers and is probably the KEY word in understanding God’s words in this scripture.

In the English translation, one will find the phrase ‘be accepted’ which appears in the original Hebrew as ‘Set.’ {שאת} This Hebrew word is a special one, as we have mentioned above, and contains a couple of different meanings.

The initial meaning of the Hebrew root of this word ‘N-S-A’ {נ-ש-א} means ‘to bear’ or ‘to carry’ and usually refers to heavy burdens. That is why one of  the Jewish Bible commentators (who was also one of the translators of the Hebrew Bible into German) pointed out that this Hebrew word should be understood as ‘lifting.’

As such, it completes the previous Hebrew figure of speech ‘Lamah Nafelu Pane’cha?’ {למה נפלו פניך?} – which was translated to English as ‘why is your face downcast?’ (its actual direct LITERAL Hebrew meaning is ‘why your face had fallen?’) 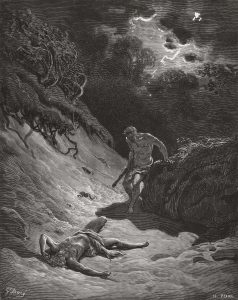 Meaning, first Cain’s face ‘Nafelu’ {נפלו} (‘was fallen’), which is a Hebrew figure of speech to describe someone who is sad or depressed, and the cure for their despair is the Hebrew word ‘Set’ {שאת} which can mean ‘lifting’ or ‘uplifting’ and refers to  Cain’s face (figuratively).

An illustration for this Hebrew figure of speech can be found in the Aaronic priestly blessing: ‘The LORD lift up His face…’ – there, the Hebrew word for ‘lift up’ is ‘Yisa’ {ישא} which comes from the same root as ‘Set.'{שאת}

‘Rashi’, who is the most popular Jewish Bible commentator in history (he lived in France and Germany during the 11th century), suggested another interesting interpretation of this word, using one of its other different meanings – ‘to tolerate.’

According to Rashi, one should understand the Hebrew word ‘Set’ as  ‘tolerating one’s sin or crime’ as can be found in the following example:

“…the LORD, the LORD, the compassionate and gracious God, slow to anger, abounding in love and faithfulness, maintaining love to thousands, and forgiving wickedness, rebellion and sin…” (Exodus 34:6-7)

In other words, Rashi explained that in fact God’s words serve as a DOUBLE warning. First, God had warned Cain that there is a reward or punishment for his actions (in the future).  Second, God will ‘tolerate his sin’ – meaning He will forgive Cain for his sin (past) if he will change his ways and do what is right. What sin you ask?

Well, the one in which Cain tried to offer God an offering that was not belonging to him and from the worst part of the fruit of the soil.

In the next post I will continue discussing this fascinating issue.