During this week’s posts we have focused on the way the different tribes of Israel’s camps were organized in the desert. Today we will discuss the Hebrew meaning of the key word for this topic – the Hebrew word for ‘camp’ and its various meanings.

The Hebrew word for ‘camp’ is ‘Macha’ne (מחנה).’ This noun comes from the Hebrew root CH-N-H(ח-נ-ה) which literally means ‘parking’ or ‘to park’ and it actually can be found in its verb form – ‘Chonim’ (חונים) or ‘Ya’chanu’ (יחנו) – a couple of times in this biblical section (Numbers 2). 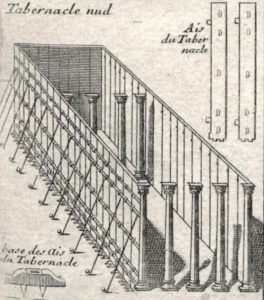 As mentioned before, this chapter (and the previous one) discusses a military census and so are the terms the Bible uses in this case. This means that the Hebrew word ‘Macha’ne’ (‘camp’) is actually referring to a ‘parking place’ of an army, or in other words, to a ‘military camp.’ One can find this Hebrew word in its military meaning in the following example:

“But a certain man drew his bow at random and struck the king of Israel between the scale armor and the breastplate. Therefore he said to the driver of his chariot, “Turn around and carry me out of the BATTLE, for I am wounded.” (1 Kings 22:34)

There in the original Hebrew, the word that was translated to English as ‘battle’ is actually the same Hebrew word that appears in our case (Numbers 2) as ‘Macha’ne’ (‘camp’). The reason for this is because that was the place where the army camped for the battle, or in other words, the king of Israel (Ahab) asked to take him out of the battle PLACE.

In 1923 Pierre Montet found the ‘Achiram Sarcophagus’ (the oldest Phoenician language inscription ever to be found) near the modern Lebanese city of Byblos – which is called in the Hebrew Bible ‘Geval’ (Joshua 13:5). There the Phoenician word ‘Macha’nat’ which sounds and is spelled almost the same as the Hebrew word ‘Macha’ne’ means ‘army’ or ‘armed forces.’

The old Latin translation, uses the word ‘tentoria’ which simply means ‘tents’ but this word goes together with the Latin word ‘turmas’ which describes a special cavalry unit of the Roman army. Interestingly, this reflects how Jerome, the translator of the Bible to Latin, used Roman terminology in his Bible translation.

It seems like the original Hebrew word ‘Macha’ne’ talks about a place of ‘parking’ or ‘camp’ (usually for armies) and that is the reason in Modern Hebrew this root was ‘extended’ and the Hebrew word ‘Chenyon’ (חניון) is used to describe a modern parking lot for cars.

At the end of the 19th century (1887) a new neighborhood was established in what is today the the center of Jerusalem. The new neighborhood was named after one of its founder’s brothers – ‘Yehudah Navon’ – and received the name ‘Macha’ne Yehudah’ (מחנה יהודה) which appears in the Hebrew Bible:

“Those to camp on the east side toward the sunrise shall be of the standard of the CAMP OF JUDAH by their companies…” (Numbers 2:3)

Many of you probably recognize this name because today that is the name of the most well-known market in Jerusalem ‘Macha’ne Yehudah Market’.