Every year, right after the national Memorial Day, the state of Israel celebrates its independence. In Hebrew, this day is called ‘Yom Ha-Atzmaut’. {יום העצמאות}

This year the State of Israel is 70 years old!

Part of the miracle of the State of Israel is that its creation was foretold by the prophet Ezekiel:
“I will bring them out from the nations and gather them from the countries, and I will bring them into their own land. I will pasture them on the mountains of Israel, in the ravines and in all the settlements in the land.”- Ezekiel 34:13 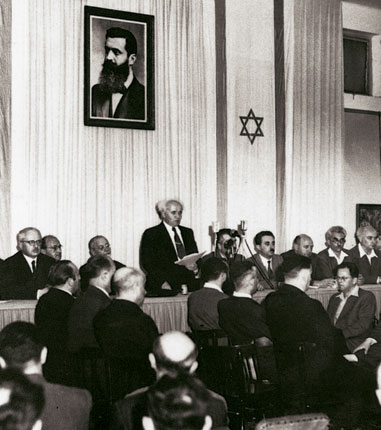 The Hebrew word ‘Atzmaut’ {עצמאות} (‘independence’ in English) is a relatively new word. This word was ‘invented’ by Itamar Ben-Avi {איתמר בן אבי} (1882-1943) who was the son of Eliezer Ben-Yehuda – the most important figure behind the revival of the Hebrew language in the modern era.

Influenced from German, Itamar Ben-Avi wanted to create a Hebrew equivalent to the German term ‘Selbstständigkeit’ – that is translated to English as ‘independence’, but literally means ‘stands by itself’.

Similar to most ‘new’ words in Modern Hebrew, Itamar Ben-Avi ‘borrowed’ a biblical Hebrew root and expanded its meaning. He used the biblical root A-TZ-M {ע-צ-מ} which means ‘self’ (like the German ‘Selbst’) and organized it in the common Hebrew pattern for nouns and that is how we got the Modern Hebrew word for ‘independence’ – ‘Atzmaut’. {עצמאות}

During this holiday, it is customary to have a barbeque with family and friends. A lot of Israelis go to visit military bases and learn more about the history and heritage of the IDF.
A strong emphasis is placed on everything that is ‘blue and white’ meaning ‘Israeli original’ such as movies, music and food.