The cultural environment of the first and second centuries CE was characterized by the strong dominance of mainly Greek and to some degree also Latin. This fact explains the significant influence of both of these languages on the Hebrew of this time.

About 200 years later, still within the Greek and Latin cultural world, the most important canonical text of the Rabbinic Jewish Oral Law was composed and became known as the ‘Talmud’ {תלמוד}(derived from the Hebrew root L-M-D {ל-מ-ד} and literally means ‘study’ in Hebrew).

Even though the ‘Talmud’ was written originally in Aramaic, one can find many Hebrew words, terms and idioms that enrich the Hebrew language and are still in use today.

The ‘Talmud’ (around 400-500 CE) marks the end of the ancient period in Jewish history in general and in the development of Hebrew in particular. From then until the end of the 18th century, Hebrew would go through what is commonly referred to as the ‘transition phase’ of the language. 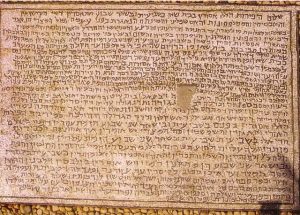 There is a common assumption that during the Medieval and Renaissance periods, Hebrew became a dead language, but as we will see here, nothing could be further from the truth. After the Talmud was composed in 400-500 CE, two fascinating Hebrew genres of both prose and poetry—the ‘Piyyut’ {פיוט} and the ‘Midrash’{מדרש} —gained popularity among the Jewish community of the Land of Israel, which resided mainly in the Galilee area (the northern part of Israel).

At that time, Hebrew was no longer a spoken language (to the same degree as it was before) and was used mainly for liturgical and educational purposes.